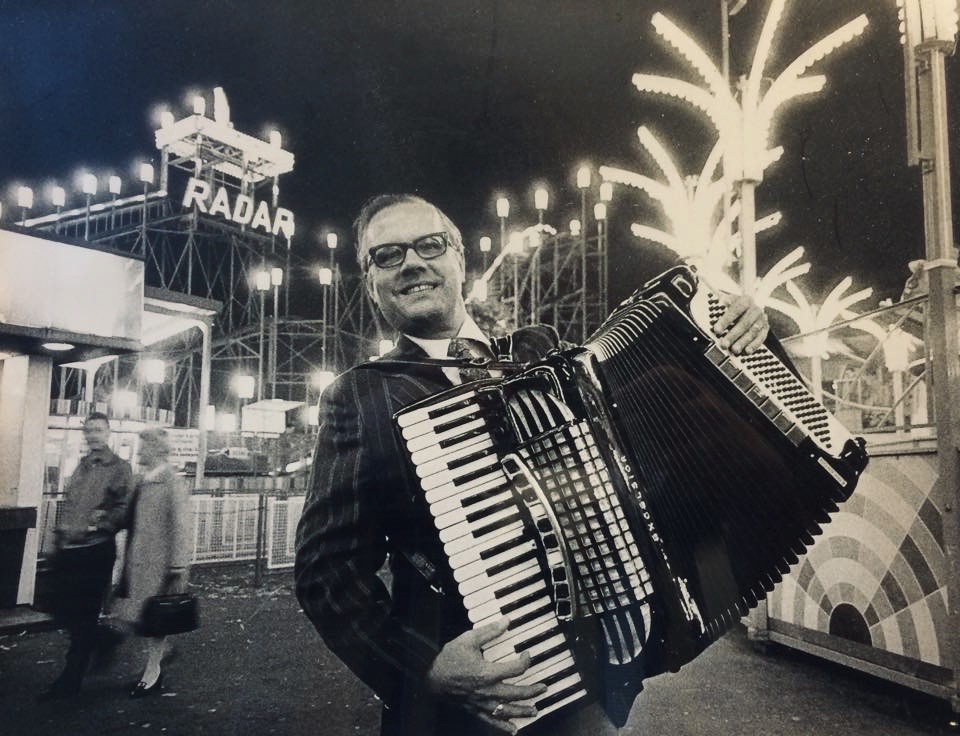 Welcome to the Virtual Museum of Walter Eriksson

We are proud to bring this website in tribute to Accordionist and Composer Walter Eriksson. On this site you will find many of Walter’s full albums as well as over 420 itemized Recordings from Walter Eriksson and others. We hope to eventually document all of Walter’s musical recordings, compositions, photographs and videos to help preserve his musical legacy. This website works together with the Walter Eriksson Facebook Music Page. Thank You for Visiting the virtual Walter Eriksson Museum!

” Better write it Down” – Walter Eriksson

Walter Algot Eriksson was born in “Fintown” Brooklyn, New York, on May 30, 1926. His mother Anna Sophia Haals (Holmberg) was born in Maxmo, Vasa, Finland (“Österbotten”) and his father Algot Axel Eriksson was born on Daniels Farm, Västanträsk, in Finnström, province of the Åland Islands. He had a sister, Gloria and half brother Harold Holmberg. Algot, who couldn´t read music, was an expert on the violin and accordion. At age 9, Walter studied under the famous accordionist Eric Olzen. Walter began to play professionally at age 14 and made his first recording the following year. Walter’s parents recognized his musical abilities early and enrolled him into the High School of Music & Art in New York City. His first record was sponsored by C.A. Hanssen and Bros., and the group was called Scandinavian Music Makers with Gunnar Lindholm on guitar and Karl Lorentzen on bass.

Walter’s musical career was interrupted by his service in the U.S. Army during World War II, serving from 1943-1945 with the 36th Infantry Division as a Bazooka man. He was assigned to front line action on the Siegfreid Line and saw action on the Rhine. He was a member of an American task force, freeing many prisoners of war. While in the Army he obtained an accordion and led several bands, as well as playing the Glockenspiel in the marching band. Toward the end of the war he entertained at various D.P. camps and Officers´ Clubs.

After the war, he returned to New York in 1946 and resumed his musical career. He played at numerous events and recorded with his then mentor, Arvid Franzen. He was only 20 years old and was quickly becoming a musical star. Walter and his father Algot entertained together until his father passed in 1950. He established the Eriksson Accordion Studio at the Viking Music House on 8th Avenue and 58th Street in Brooklyn, also known as “Lapskaus Blvd.” At one time, he had over 1,000 students, some of them becoming professional accordionists, such as Walter’s “first” accordion pupil Herby Anderson, Lillian Andersson, Ruth Johnson, Bert Stromholm, Artie Carlson, JoAnn Åkeson, Jean Schroder, George Hedlund, and later on Ellen Lindstrom. Also at this time Walter was a regular on the popular live radio program Scandinavian Echoes with Hans Berggren. He made several recordings and produced many lives shows with Hans. During this era in time, Walter collaborated with other artists such as Pietro Frosini, Charles Magnante, Viola Turpinen, Viola Spongberg, Thoralf Tollefsen, Svend Tollefsen, Harry Vallin, Rune Persson and Brynie Brynofsson. Walter was featured in the magazine Rythme, introducing the new sensational uniform “checkerboard” keyboard, invented by accordionist friend John Reuther. And that was just in the USA.

In 1949 he married his sweetheart Emmy Nordin. They met at Vasa Temple in the Bronx at a Swedish dance. They had two children, Jeanne Emmy and Walter Allen. He continued teaching in his house studio in the 50s and 60s. He made his first trip to Sweden in 1955, upon meeting Andrew Walter who made a trip to America earlier that same year. Annual trips to Sweden included many compositions and recordings with his colleague Andrew Walter. Visits to Sweden led to musical collaborations with Ole Johnny, Sven-Olof Sandberg, Olle Bergman, Walle Söderlund, Mogens Ellegard (Denmark), Sven Palm, Helge Blom, Gnesta Kalle, and best friend Andrew Walter, along with Walter´s Swedish mentor, Calle Jularbo. He was the only person to take “movies” at Carl Jularbo´s 70th birthday celebration in Sweden.
In the years that followed, in between trips to Scandinavia, Walter played at the Danish Athletic Club in Brooklyn, Vasa Temple in the Bronx, The Swedish Football Club, Swedish Seamen’s Center, Finn Hall, Imatra Hall, Sons of Norway Hall, Vasa Club House on Dean Street, Norwegian Seamen’s House and Vasa Park of New Jersey. His most famous New York band musicians at that time were Svend Tollefsen, Tony DiBartolo, Walter Andresen and Roy Wilson. He appeared at major Scandinavian-American events in Manhattan for the Scandinavian-American Foundation, The American-Scandinavian Association, Finlandia Foundation, and the Danish-American Society, the Swedish American Chamber of Commerce, the Norwegian American Chamber and the Danish Chamber. Too many to mention, he provided the music for numerous dances, anniversaries, birthdays, private parties, cruises, banquets, picnics, weddings and church event.

In the early 60s Walter moved his family to the corner house on 78th Street and Fort Hamilton Parkway. A great location for music students to travel to by bus or subway and he continued to do that during the day, while busy with music jobs on the weekends and whenever. He recorded a series of “Sing Along in Swedish,” “Sing Along in Norwegian,” Finnish recordings with Veikko Ahvenainen and Lasse Pihlajamaa, and Danish albums. The Swedish sing-alongs featured Andrew Walter´s wife Birgit Kejving, Ricki Löw and Kjell Wigren on vocals. The sing-along in Norwegian albums featured Odd-Tom Risdal of Ovrebo, Norway. Walter recorded with the popular Bröderna Lindquist and Kjell Wigren and was on the TV show NyGammalt, Lördag me´Larsson, Sveriges Magasin, Musikant Med Bälge, and Husker Du. During the 70s he paired up with Hasse Tellemar, Sweden´s popular host of “Ring så spelar vi” radio program. Together they appeared on many TV shows in Sweden and toured the USA with visiting groups. Eriksson and Tellemar recorded 4 albums which included American swing music. Hasse and Walter were very close until the end. Hasse´s wife Anna-Lisa and Walter´s wife Emmy also became best girlfriends.

Walter appeared on American TV programs such as I Remember Mama, the NBC Home Show, the CBS Children’s Show “Around The World with Gunther Less,” and was a guest on the Merv Griffin Show, The Arthur Murray Show and Faye Emerson Shows. He made radio commercials for Rheingold and SAS Airlines. He recorded with RCA Victor a series of folk dances under the direction of Michael Herman that were used in all New York City public schools. Walter had his own radio shows, including “Scandinavian Breakfast Club,” “ Viking Melody Time” and “ Scandinavian Echoes,” passed on to him by Hans Berggren.

Walter played in the presence of Nordic Royalty: King Olav of Norway, King Carl Gustav and Queen Silvia of Sweden, Crown Prince Harald & Crown Princess Sonja of Norway, Princess Margareta & Christina of Sweden, and President Urho of Finland. He has also entertained celebrities Liv Ullman, Ann-Margret and Victor Borge and accompanied opera singer, Lauritz Melcior. He was featured on stage at Lincoln Center for the 1976 USA Bicentennial, along with the King of Sweden.

Walter was honored with prestigious awards: Knights Cross First Class Order of Vasa from the King of Sweden, the St. Olav’s medal from the King of Norway and the Finnish Government Cultural Medal and various honors in the USA including Man of Year at New York´s Vasa Day along with Eric-Olof Ericson. In the 1980s Walter accompanied the Vasa Folkdancers as their main musician and toured with them in 1983 to Sweden and Åland. He appeared on live TV at the Grand Finale of the Hälsinge Hambo. In 1986 he recorded “A Swedish Christmas” with the Vasa Foldkancers, working together with Richard Feingold´s arrangements with a 24-voice choir in 4-part harmony. In 1987 the Scandinavian Accordion Club of New York was born, working together with his daughter Jeanne Widman. In 1988 the SAC appeared at the South Street Seaport as part of New Sweden ´88, where Walter and his son Wally played on stage in the presence of King Carl XVI Gustaf & Queen Silvia. Walter accompanied 100 singing children in folkcostumes from the combined local Barnklubbens, led by Jeanne, to the tune of O, Carl Gustaf. In 1990 he accompanied The Heritage Choir at the Grand Reopening of Ellis Island. In 1992 a the SAC toured Sweden and Åland, with a busload of 50 people. It was there that Walter received the treasured “Publiks Favorit” award bestowed upon him at the largest accordion festival in the world, “Bälgsel vid landvägskanten” in Ransäter, Värmland, Sweden.
Walter was an active member of the American Society of Composers, Authors and Publishers, Vasa Order of America, Sons of Norway, Balder Lodge of the Masonic Order, The Scandinavian-American Businessmen´s Association, Musician’s Union Local #802, The Swedish Society of New York, The American Accordion Association, The Swedish Accordion Association and the Norwegian Accordion Association. For a number of years He wrote a monthly column for the Swedish accordion magazine “Dragspelsnytt.”

Walter made his own records in his music studio in the basement of his house on 78th Street in Brooklyn and also developed his own film as photography was a strong passion of Walter´s. He enjoyed painting, designing the artwork for LP record covers and was a short wave radio fanatic. He also played the Hammond Organ, Piano, Clarinet and Bass. He was also a lover of cats and had many of them over the years, giving some of his pupil’s newborn kittens. For those who knew Walter personally, he was a gentleman with a comical personality.
Walter Eriksson recorded over 2,000 selections for various labels in 20 languages. He has used other professional names on these recordings such as : Walter Nordini, Nordini’s Musette Orchestra, Valtaro Ventura, San Diego Tango Orchestra, Scandinavian Boys, Pohjolan Pojat and Egon Walte. Walter has composed more than 300 songs which were recorded by him and other artists and continue to be played today.

In July 1993 Walter was invited back to Bälgspel but took ill upon landing at Arlanda Airport, Stockholm, and was rushed to the hospital while staying with the Tellemars. Upon his return home to Brooklyn, New York, he was admitted to Lutheran Medical Center in August. Walter Algot Eriksson succumbed to liver cancer on September 20, 1993. He was only 67 years old. Colleagues from Sweden and Norway flew to America for the funeral, namely Hasse Tellemar, Walle Söderlund & Odd-Tom Risdal. Several hundred people attended the 3-day wake and church service at Salem Church. 4 ministers presided, singers paid tribute, and Hasse Tellemar played “Brooklyn Memories” from the back of the church. At the time he was survived by his wife Emmy of 44 years, 2 children (Jeanne & Wally and their spouses), and 4 grandchildren – Chad, Nicole, Britt and William. Anna-Lisa was born one month after Walter passed.

To honor her father, Jeanne started the Walter Eriksson Musikfest, a musical weekend at Vasa Park, Budd Lake, New Jersey. Many musicians and years of musical tributes poured in and some of these moments can be viewed on the website www.skandjam.com and www.waltereriksson.com.

In 2002 Jeanne helped “tie the ribbon” at the accordion museum in Ransäters Hembygsgården where the annual accordion festival is held every July in Ransäter, Sweden. At DragspelsExpo museum, one can visit the Walter Eriksson room where there is an exhibit dedicated to him and his music. Visit the museum’s website www.DragspelsExpo.com.

Walter´s grandson, Chad Widman, has a great interest in Walter’s music and its history. He has taken great privilege to help in contributing and preserving the legacy of his grandfather. He has created a website with photos, videos, articles, radio and TV programs featuring Walter Eriksson and other musicians too. Visit the virtual Walter Eriksson museum at www.WalterEriksson.com. There is a Walter Eriksson Fan Page on Facebook – www.facebook.com/WalterAlgotEriksson.

From short wave radio, 78’s, to 45s, 33 1/3 LPs, 8-tracks, cassette and CDs, Walter would have loved to have seen himself on Web Sites like YouTube & Facebook along with the thought that he could be seen and heard all over the globe.

It is with great hope that his musical legacy will continue and never be forgotten.